Let’s start this post by going back in time a little bit to Valentine’s Day 2015. In general Valentine’s isn’t a massive deal in our house- We don’t exchange gifts, we don’t go out on extravagant dates, in fact, we rarely even go out for a simple dinner. A special date at home, that I put Simon in charge of arranging, is more typical for us. One year Simon attempted to make heart-shaped pancakes for dinner {and then went a bit wrong so I had to take over}, another time he surprised me by taking me to an outdoor skating rink.

I’m getting off topic. ANYWAY.

Valentine’s Day 2015 we decided to do something totally different. My sister heard that a local golf course was doing an exclusive 4-course dinner and it sounded pretty — well, extravagant— but we decided to go for it. We booked a table with my Sister and her Now-Husband and set off for a fancy Valentine’s night out. 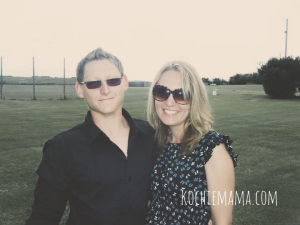 So, we ordered some wine and we’re sitting at the table looking over the evenings menu {drooling– it all looked amazing}. Each course had two choices. An outburst of laughter comes from my left followed by “I don’t get it.. why do they call it a leak?” And more laughter. Huh?? “Right here, it says “Smoky bacon, potato, leek soup… what, is it leaking out of the bowl?!”.

Dear Darling Husband; a leek is a vegetable.

He hasn’t lived it down.

Yup, we eat at fancy places a lot. Can’t you tell? The soup was divine, by the way.

{… What has this got to do with Thanksgiving….?}

So, fast forward to last weekend. I made the commitment to host my very first solo Thanksgiving dinner. I’ve hosted before but I’ve had a lot of help. I wanted to really do it alone- I’ve really been wanting to check that off my bucket list.

I settled in for a hour of downtime and tuned into my girl, Ree, and it just happened to be a Thanksgiving episode {surprising considering American Thanksgiving is more than a month away} said in which she featured a Potato Leek Casserole. It was a sign from above that this was a side dish that was destined to be on my Thanksgiving table. 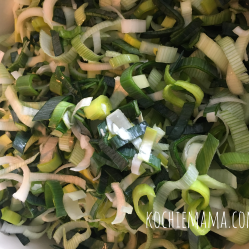 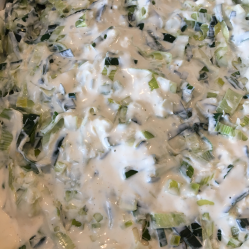 Some may say it’s risky to try a new dish for company, let alone a Holiday dinner, but Ree has never failed me. Everything I’ve ever made by The Pioneer Woman has been excellent.

So, I put together my feast for 7 adults, plus 3 that needed care plates, and the littlest Kochie. I chose, purchased, prepped, stuffed, basted and roasted that beautiful bird solo. On the side I served 2 kinds of stuffing, mashed potatoes, Potato Leek Casserole, broccoli casserole, carrots and buns. 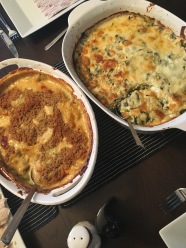 It all went perfectly! I accomplished the feat by myself, with the exception of my potato mashing Mother In Law and my gravy making Mama. Oh, and also dessert- I delegated that to the Kuchen lady at the local farmers market, and my Mother In Law for her amazing pumpkin pie.

I was pretty darn proud of myself. If I do say so myself.

The Potato Leek Casserole was delicious {I reassured Simon that no leaking would occur}. The only substitution I made was the cheese on top. I couldn’t find Fontina so I looked up suitable substitutions and used a combo of mozzarella and Monterey Jack. Scrumptious. You can find the recipe HERE

Happy Thanksgiving! What did you make for dinner this weekend?